Call it a passion. We love electric bikes and have been riding, selling and servicing them for over 5 years now. We like to think of ourselves as electric bike gurus. eBoom is not a franchise, but a boutique business built from scratch. So, we get to pick and choose some of the best electric bike brands around, backed by solid, dependable companies.

eBoom also sells and repairs all types of bikes, not just electric. This includes gravel bikes, mountain, recreation, kids and transportation bikes - all in our same shop location.

Whether you prefer to shop on our website or to come visit us, we’re here to help you with all of your cycling needs.

eBoom Electric Bikes was featured recently in an article by Aventon, a great brand partner.

About Us - the Long Version

Hi, I'm Lee Ann McKay, one of the co-owners of eBoom Electric Bikes, and this is my story.

eBoom Electric Bikes was imagined and built into a retail business by Robin Coffman and me in 2016. We opened in the spring of 2017.

We're often asked by our customers how we came up with the idea of selling electric bikes. Robin and I both love the outdoors and cycling. We've always been explorers by bike, and liked the idea of selling a product that was fun and appealed to people like us, Baby Boomers. However, we couldn't decide what that product should be.

When Robin suggested that we check out electric bikes, I was appalled. I imagined a moped from the 1980s, and really thought that was "cheating" in the cycling world. She convinced me that it was worth checking out. The closest ebike was in a shop in St. Louis, so we drove there to see it. When we arrived, the bike shop owner had to dig the lonely electric bike out of the back, dust it off, and let us give it a whirl. I don't remember the brand, but I do remember that it was an eye-opening experience. It was a real bicycle and had this crazy electric assistance. It was unbelievably super fun. We were both hooked.

Then the research and due diligence began. We attended Interbike, an international bicycle show in Las Vegas. We were lucky to be able to test ride many brands. Who knew there were so many. 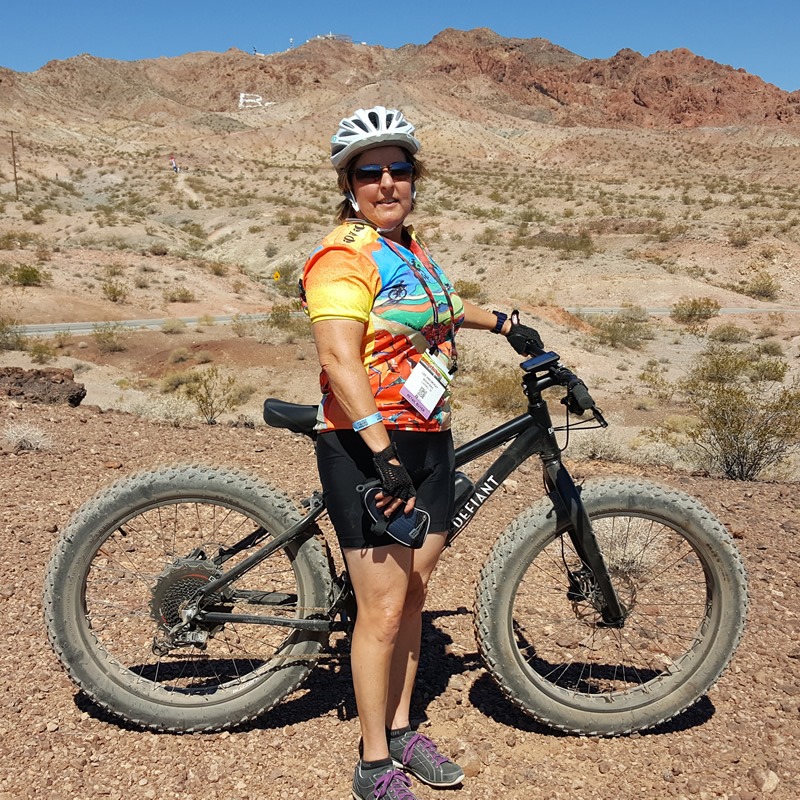 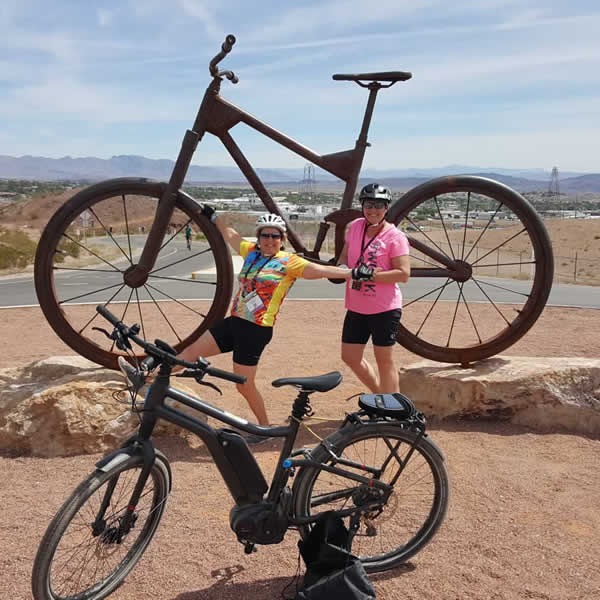 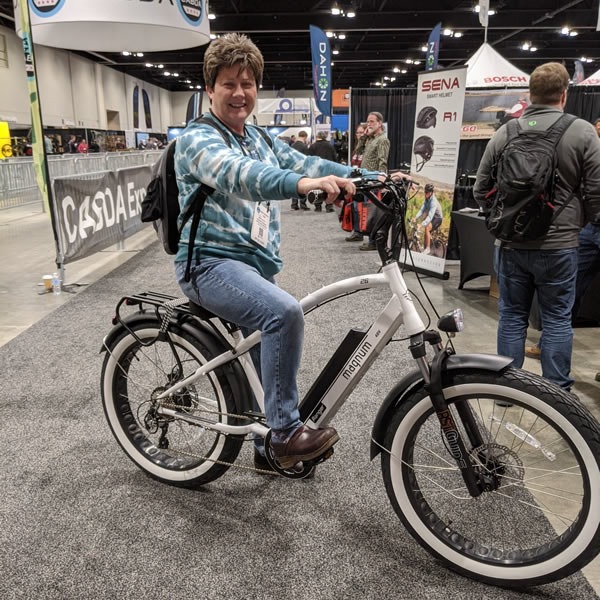 Robin is all smiles when she tests a new Magnum ebike at a bike show.

We had to write a business plan, get a loan and find affordable commercial space. We ended up in Whitestown, Indiana, the fastest-growing town in Indiana (and maybe the Midwest). We started in a strip mall on Whitestown Parkway in the spring of 2017. Most of the people who came into the shop the first year declared that our bikes were "cheating." It was a foreign concept to many until they tried an ebike, then it changed their world.

We were so excited when our first customer purchased an electric bike. Sandy and Chuck were from out of town and found us on the internet. Sandy could no longer keep up with Chuck in their social group rides, so they decided to be early adopters and get her an ebike. We were so tickled that they were actually buying an ebike from us. Hey, this just might work. People might like these bikes. Whew. To this day, Sandy and Chuck bring her bike in for an annual tune-up, and we buy them lunch. Thank you Chuck and Sandy! See you next spring. 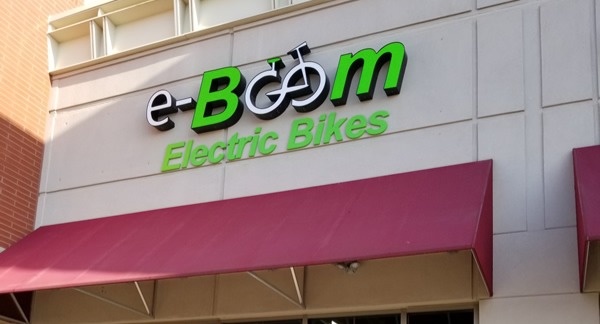 Exterior of our first shop on Whitestown Parkway.  eBoom stands for "Electric Baby Boomers" which was way too big for our sign. 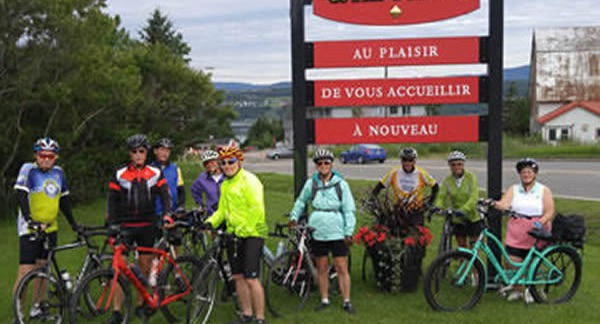 Our first ever customer Sandy (standing next to the green ebike on the right). She still does group bike rides with her husband Chuck and their friends on her ebike.

We outgrew our strip mall space and moved to our current location in Old Whitestown about three years ago. Location, location, location. Right? It is on the Big 4 Trail, a bike trail that will go 50 miles to Lafayette when finished. Perfect place to test ride ebikes. And, once surrounded by farmland, there are now several new subdivisions going in next to us.

Today, I run the shop with Sean Kenemore, our service manager. Robin has a full time job, but helps on the weekends during the summer. We have great employees who are passionate about electric bikes, and we are very grateful and fortunate to be selling lots of electric bikes these days. They seem to be very popular now. We don't have to explain what they are, and people don't call us cheaters anymore.

(And I must say thank you to Ray, Nancy, Wayne, Terry, Adam and Abby for helping eBoom get started. We could not have done this without you.) 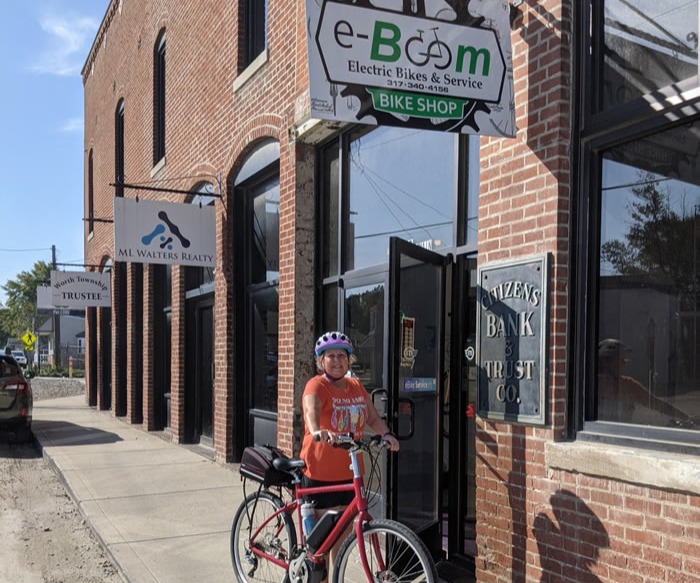 Lee Ann rides her own ebike to work often in the summer months. This is outside our current location. 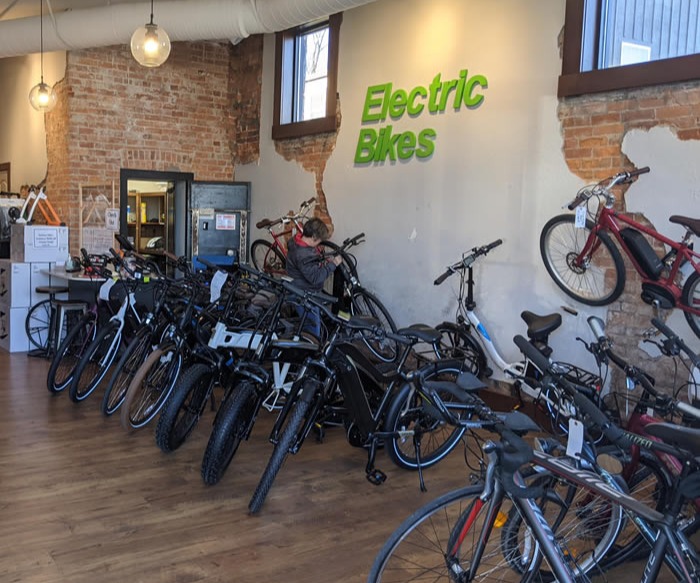 The sales floor inside our current location. The service center is upstairs. Come check it out. 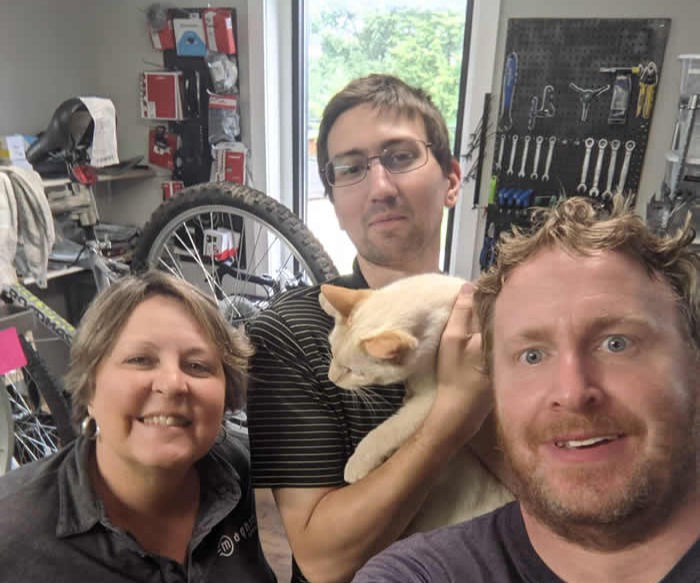